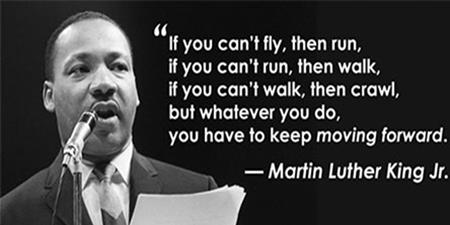 There are times in our lives and in our nation where we come to clarity, enlightenment or a revelation because of the trial of past days.  It is a time when we understand why we left the peace, went into darkness and now have arrived at a point of resolution where we understand it all.  It was a journey we had to go through to come out enriched by a walk into a new wisdom.  Man had from the beginning marked these disruptions of time with markers to help us remember the discoveries of this time so that we would not have to go back through that trial again.

Today is one of those markers.  We marked this day as Dr. Martin Luther King, Jr. Day.  We marked it as such because there was a dark place where many lived and it came to a disruption of time and a climatic death of a man who was a dreamer of better days for us all. He was one who had seen beyond the darkness of racial oppression to a day where there would be racial acceptance and harmony among us.  He tried to teach us and lead us into the vision he alone had seen.  We were divided in understanding of whether it was even possible.   There was resistance to progressing beyond the darkness so someone snuffed out that little light that was purposed to deliver us all.

In the darkness of the death of that light, we arrived at a time of enlightenment.  We were brought into a time where we reflected on what had happened.  We saw that there was a light for a brief moment that represented a hope and that gave us a glimpse of what was possible.  Then we cried at having lost the hope of that light.  We continued to cry for a period of time as even those who had not seen it before saw the hope diminished.  But some arose and said let’s not lose that hope but let’s plant a marker so that we will not forget what we have experienced.  Each year we are reminded of the great trial between darkness and light and how we must never again snuff out that light in anger.  Dr. Martin Luther King, Jr. Day was that marker.

Like in Egypt, there came a day when there was a generation that did not know Joseph (Martin) and the great work he had done and so the people returned  back to the times before Joseph’s (Martin’s) light.  Woodrow Wilson is quoted as saying: “The history of liberty is a history of resistance.”  Winston Churchill said: “Victory will never be found by taking the path of least resistance.”  When we rise up to resist the bad we must continue until the good is accomplished.  Dreamers know that they are only the light, not the candlestick.  The light is the brightest point at the top of the candlestick that supports it; and it is the candlestick that must continue to supply strength for that light.  Joseph knew he would not see the prophesied deliverance and he left a proclamation for his remains when deliverance came.  Even Dr. King stated he would not see the deliverance but he gave visions of hope that others would be the candlestick supplying oil to light the way for future generations until the dream was fulfilled.   Thomas Jefferson said: “The spirit of resistance to government is so valuable on certain occasions that I wish it to be kept alive.”  John F. Kennedy said: Those who make peaceful revolution impossible will make violent revolution inevitable.”  Jesus said: “…Yet a little while is the light with you. Walk while ye have the light, lest darkness come upon you: for he that walketh in darkness knoweth not whither he goeth (Joh12:35 KJV)”.

Dreamers have hope that others will arise to carry forth the light until the dream is fulfilled but we have been those that have enjoyed the benefits of the light without catching a vision for ourselves.  We are therefore seeing the last glimmers of the light being diminished and leaving little hope for future generations.  We saw what happened to the biblical people of Israel.  Moses brought them to the mountain but few were able to hold on to that hope and enter into the Promise Land.

Joseph never lost sight of who he was even in a strange land and he foresaw even his bones traveling to the Promise Land.  Joseph made way for his family to survive even in his death and he did that by passing on to them a hope that lived beyond him.  He told them of the source of his hope: that Eternal Spirit that is the Light that never dies.  Our people have had the practice from ancestry of telling our history to the children.  When we stop telling the stories of our history, journey and its goal, then the light begins to diminish.

Dr. Martin Luther King, Jr., was a minister and a prophet of his time and his people.  He took us as far as he could but we must continue the journey with the lessons and examples he left us.  He was not the light, as John the Baptist stated that he was not that light.  They were only a reflection of He who was that Light that lights the world.  We must follow the Lightgiver that Moses had, which was the Father.  Moses pointed the way to the True Light that is Jesus Christ.  Christ is that perfect Eternal Light that we can have intimacy with and follow all the way to the true Promise Land.  Let us now arise to stand in that light that has been shown us and catch our own vision of the Light and Truth that brings true liberty which man can never destroy.

“We must use time creatively, in the knowledge that the time is always ripe to do right.” – MLK

If you enjoyed this article, go to Truth and Life Ministries at joycerebapayneministries.com for more insightful reading.